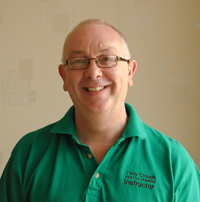 Tony Clough retired from West Yorkshire Fire Service in April 2009 after 30-years Service. During this time he gained much experience as a Fireman treating and caring for patients with traumatic injuries. He became a Fire Service Trauma Casualty Care Instructor in 1994, and utilised his teaching skills during the final 3-years of service by teaching at the International Fire Service College at Birkenshaw, Bradford.

He became a Community First Responder in 2005, a charity based organisation that supports the Yorkshire Ambulance Service by attending emergency incidents in the community, where patients require resuscitation and defibrillation. During this time he has been awarded with TWO Royal Humane Society Certificates of Resuscitation for the successful resuscitation of patients.

Passionate about First Aid he created Tony Clough FIRST AID TRAINING in April 2009, and gained HSE approval (Approval 36/11) in 2011 to teach all First Aid and Manual Handling courses. Tony has now been approved and accredited by First Aid Industry Body (FAIB); he is also a member of Federation Of First Aid Training Organisations (FOFATO)

Tony was at the 2012 Olympic Games. In his voluntary role of First Responder he was based at the Aquatic Centre in the Olympic Park for the swimming, diving, water polo and synchronised swimming events.

“I had a wonderful Life experience and recommend volunteering to everyone. If I learn Portuguese I can be at the next Olympics in Rio in 2016 – what should I do?” Note: I didn’t get to Rio, I found the Portuguese language the stumbling block